This is Forrest Fenn’s scrapbook number fourteen. Forrest shared this note on Dal Neitzel’s website in February of 2013. You can find the original scrapbook post at this link here: (offline) Scrapbook Fourteen.

Forrest Fenn occasionally shares favorite memories, moments, and reminisces with Dal Neitzel through these scrapbooks who then shares them with the rest of the Fenn treasure hunting community. While Forrest has said they do not specifically contain clues related to Fenn’s treasure, they give us insight into his life, thoughts, and memories which have all helped define who he is and what is important to him.

In scrapbook number fourteen, Forrest shares a picture of him standing in his “vault” with designer Donna Karen This is a rare picture since it shows the treasure chest as well as the cast golden frog seen in The Thrill of the Chase book.

Here is Forrest in his vault with the designer Donna Karen. She tries on an antique Kiowa Indian legging made about 1875, and covered with green ocher. Maybe she was thinking of something new in ladies evening wear. Forrest said she is a very special and sensitive woman. When she lost her husband to cancer she turned her wedding ring around so she could hold the diamond in her palm. She said it made her feel closer to him.

The Treasure Chest In The Vault:

There are not many pictures of Forrest’s vault. This is one of the rare few. The chest was still in the vault at the time this picture was taken.

Forrest Fenn kept the treasure chest in his vault before he hid the box and the gold in the Rocky Mountains somewhere north of Santa Fe. When I first heard about the idea of Forrest storing his treasure chest in a vault, I pictured an iron lock box or bank vault that was as secure as the gold bullion in Fort Knox.

This picture of Forrest and Donna standing in the vault shows that the vault is actually more of a storage room with walls, counter tops, and shelves made out of wood and accommodating a vast array of artifacts. The picture also tells us the bronze treasure chest was still in Forrest Fenn’s possession and located in his vault when the photograph was taken.

We can clearly see several things in this picture of Forrest’s vault. The first is that a dark box (which appears to be strikingly similar to the bronze treasure chest he hid) is located in the left hand side of the frame in the picture below (circled in red). You can see the bronze metal shine and the rough details of the artwork on the chest’s side, front, and top panels.

The second thing that stands out is the small gold colored frog hanging on the wall in the right hand side of the frame in the picture below (circled in red). This frog appears to be very similar to the gold cast frog showcased in throughout the pages of The Thrill of the Chase book.

We can also see many other necklaces, fetishes, and artifacts hanging on the wall, but nothing else immediately jumps out at me. I was looking for the “Tairona and Sinu Indian necklace from Columbia” among those necklaces, but I didn’t see it offhand.

That Indian necklace is estimated to be around 2,000 years old, so it was probably kept in one of the display cases in the vault. Forrest says in The Thrill of the Chase book, “It contains thirty-nine animal fetishes carved from quartz crystal, carnelian, jadeite and other exotic stones. But special to the necklace are two cast gold objects – one, a jaguar claw and the other, a frog with bulbous eyes and legs cocked as if ready to spring.” (The Thrill of the Chase, page 130) This golden frog on the necklace is a smaller one than the one hanging by itself on the wall in the photo (the two different frogs are seen together in other chest pictures – see below).

Pictures of The Frogs and Treasure Chest

The large golden frog and chest can be seen in the picture below. This picture is featured in The Thrill of the Chase book on page 126 in the “Gold and More” chapter.

A close up image of the large cast golden frog can be seen here with other golden coins and gold nuggets on page 133 in the “Gold and More” chapter in The Thrill of the Chase book.

A later Forrest Fenn’s scrapbook number one hundred and fifty eight showcases both the large cast golden frog as well as a smaller cast golden frog together in an early arraignment of the Fenn treasure chest (Forrest Fenn said not all of these artifacts and items were hidden in the final version of the chest).

The large golden frog is circled in red in the upper left hand side of the treasure chest picture. A second, smaller golden frog can be seen with its legs and underbelly facing up in the middle right hand side of the picture. This smaller frog is the one attached to the Colombian Tairona and Sinu Indian necklace.

Forrest Fenn is the writer of these scrapbooks. He sends them to Dal Neitzel for sharing and posting. Forrest hid a treasure chest full of gold somewhere in the Rocky Mountains and dared anyone willing and brave enough to come look for it. You can learn more about the Fenn’s treasure hunt here: How to Find Fenn’s Treasure.

Interested in learning more about Forrest Fenn, who he is, and his shared memories? 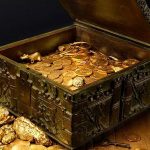 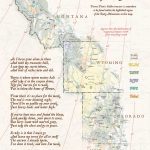 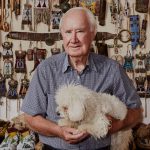 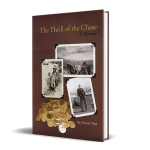