Where Can You Find Fenn's Treasure?

Are you looking for Fenn's Treasure? Then it's a good thing to know where to look and the places you might find it. Forrest Fenn narrowed the search area down for his treasure chest to the following areas:

Fenn's Treasure Map In The Too Far To Walk Book

When people think of the "Fenn's treasure map", this one usually comes to mind. This map is found in the foldout back page 265 of the Too Far To Walk book by Forrest Fenn. It came with the following note. The book is also full of other great memories, notes, and insights. Get your copy from the Collected Works Bookstore!

"Several years ago I wrote a book titled The Thrill of the Chase. In it, I spoke of a chest full of gold and precious gems that I hid in the mountains. A dare went out to everyone who possess a sense of wanderlust; study the clues in the book and thread a tract through the wiles of nature and circumstance to the treasure. If you can find it, you can have it. I warned that the path would not be direct for those who had no certainty of the location beforehand, but sure for the one who did.

We've recently been turned on to the map and atlas products of Benchmark Maps, and have had fun partnering with them to produce this treasure map. Their unique styles of cartography speak to our shared spirit of exploration. I declined their invitation to put an X on the map, but will admit that it is there in spirit." 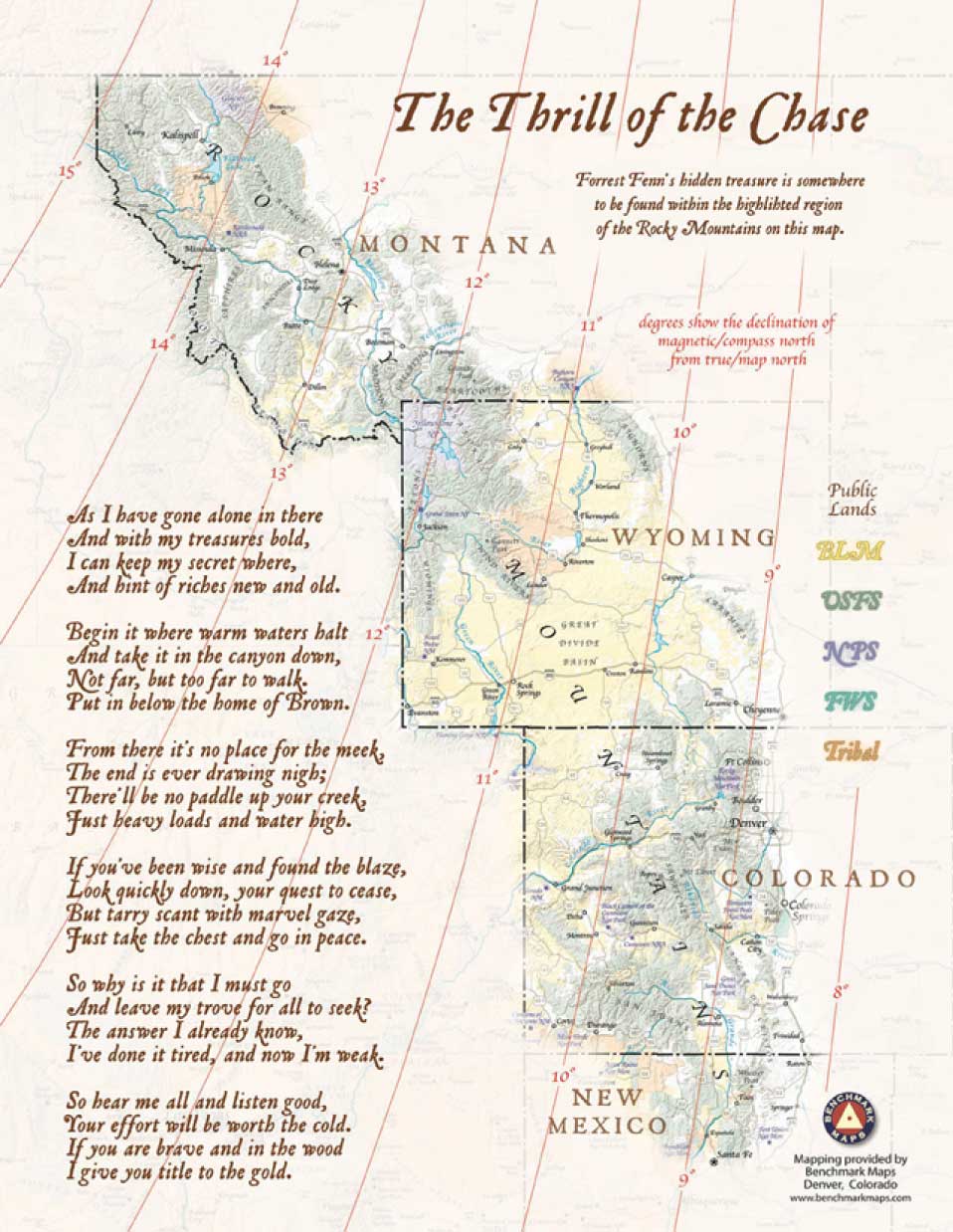 Forrest Fenn's Treasure Map of the Rocky Mountains and Poem

About The Too Far To Walk Map

This map of the Fenn's treasure search area was produced by Benchmark Maps in Denver, CO in 2013 for Forrest Fenn's book, Too Far To Walk. Forrest said there was something on the map that was unexpected. Some people have speculated it is the fact that the Benchmark map of the Rocky Mountains ends at the Canada-United States border. The map is available in several sizes from Benchmark Maps with the same level of high detail:

Occasionally Benchmark Maps produces limited availability runs of special edition Forrest Fenn's treasure maps. These maps take on a similar style of the original treasure map found in the Too Far To Walk book (shown above).

The map pictured here is from the 2016 Fennboree III. The Fennboree is an annual festival held in honor of Forrest Fenn and to celebrate the thrill of the chase and looking for Fenn's treasure. It is usually held at Hyde Memorial State Park in New Mexico. More information about the Fennboree can be found on the Fennboree website.

The Forrest Fenn treasure poem is found on these maps on the bottom left hand side long with a picture of the bronze treasure chest set behind the poem. Other subtle differences from the original map include the coloring on the map, the lack of notations showing the different types of land found on the map (public lands, BLM, OSFS, NPS, and Tribal)*, and the longitude lines marking associated degrees.

Where Can I Get A Fennboree Map?

These special edition maps must be ordered or bought while they are still available. In the past, they were made in batches of 100 serialized runs and signed by Forrest Fenn. The original price for these Fennboree maps seems to be around $100 USD. If you weren't able to buy a map at the original offering, the only other way to get one is from someone who currently has one. 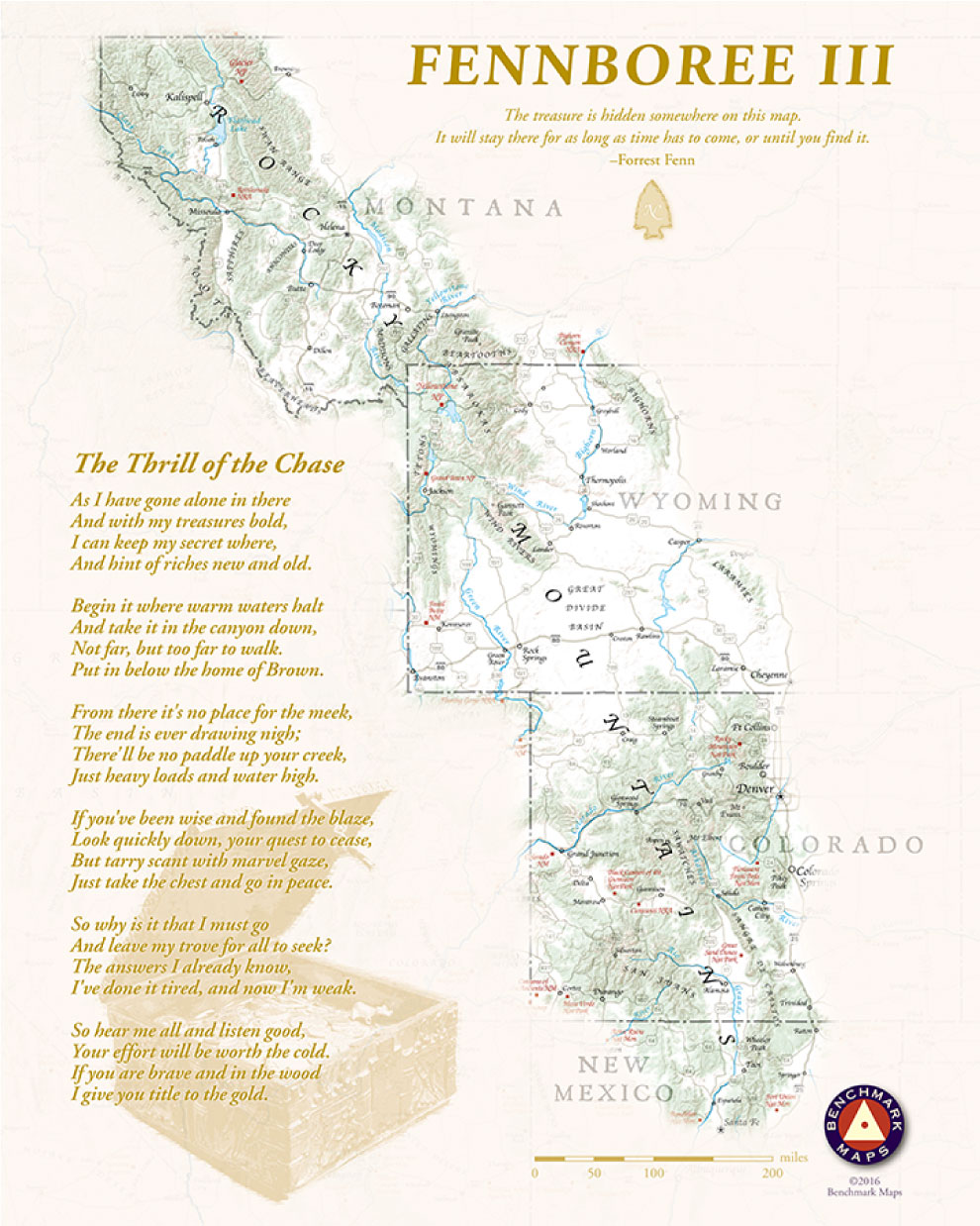 Adventurers, researchers, and other treasure hunters, other have made several helpful and interesting maps related to the Forrest Fenn treasure over the years. You can find links to some of the best maps and download them in high resolution here!

Ross Thorn is a cartographer (a.k.a mapmaker) who likes to play around with geographic informational system (GIS) tools and frameworks. He took an interested in Forrest Fenn's treasure back in 2016 and decided to create a data-driven map of the search area for Forrest Fenn's treasure to showcase areas where the treasure chest could possibly be. The map is currently located on Ross's github page.

The map highlights several areas including areas where the treasure chest is probable to be found (green area), possible to be located in (yellow area), and impossible to be found in (white area). The map also marks prominent features such as cities, peaks, streams, bodies of water, interstate highways, and national and state parks.

Using these areas, we can see there is still a lot of ground to cover while looking for Forrest Fenn's treasure. However, it does help narrow the field when checking potential solve locations and is cool to see the data behind Forrest Fenn's hints on the map! 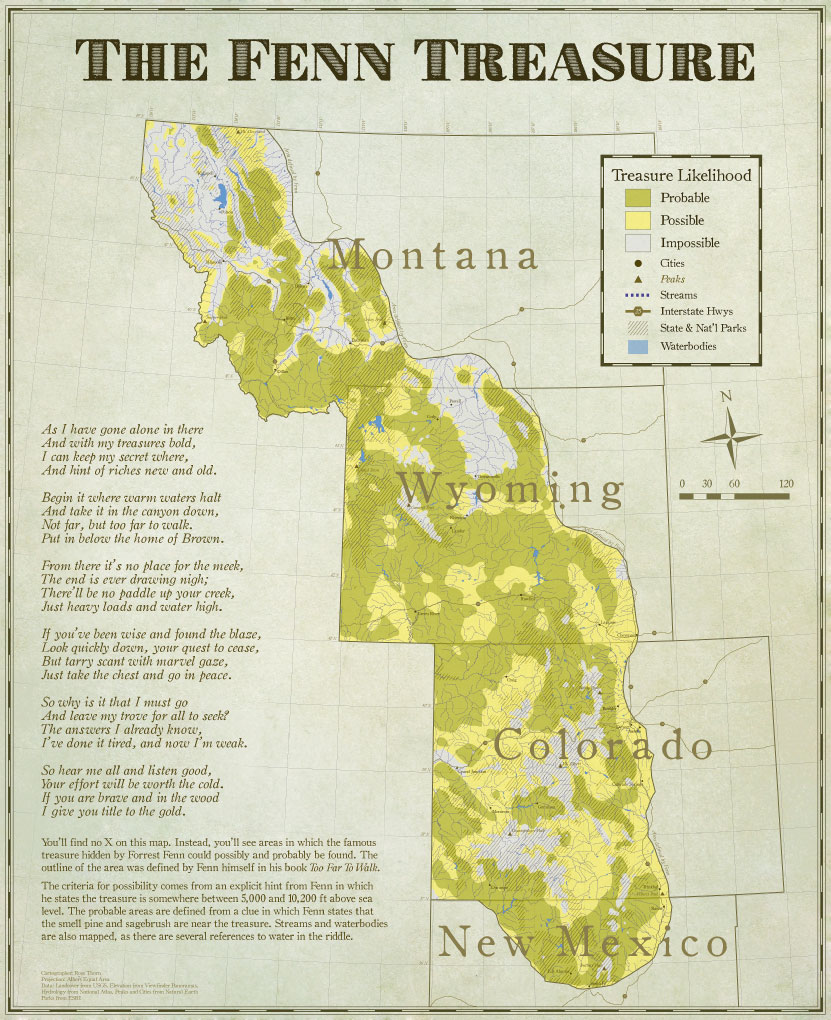 Where Could It Be? By Toby Pennington

This Forrest Fenn's treasure map was created by Toby Pennington for Reader's Digest. It was published in their April/May 2018 edition. Forrest Fenn said the treasure was above 5,000 feet above sea level, below 10,200 feet, and near pine and sage brush (he could smell it).

Using this information, Toby highlights all of the probable, possible, and impossible locations where the treasure chest could be hidden. He also marked other key map features like cities, water sources, and national and state park areas and locations. Read the full Reader's Digest article.

This map is helpful in narrowing down possible solve locations since there are some areas which do not match locations close to what Forrest said. 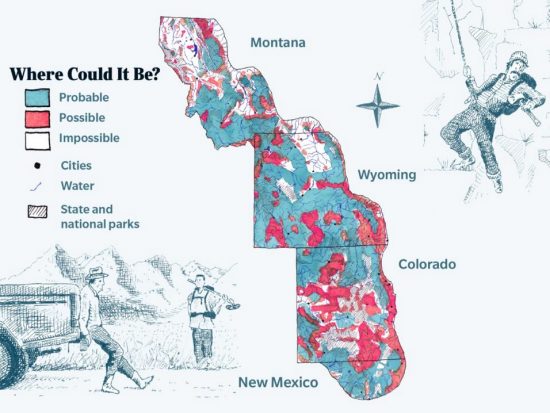 How you ever wondered how far could Forrest Fenn have reasonably traveled in the Rocky Mountains? This question seems like it would be pivotal to locating Fenn's treasure since it could narrow down the search area for the treasure.

Unfortunately, the answer is Forrest could have traveled pretty much anywhere in the Rocky Mountains to hide the gold and the treasure chest. Forrest had access to many resources including a Piper Malibu Mirage airplane. He talks about this airplane and where he liked to fly in Forrest Fenn's scrapbook thirteen. This helps us understand how far exactly Forrest Fenn could traveled within the boundaries of the Rocky Mountains.

While Forrest Fenn probably flew and had access to several airplanes, he mentioned how much he enjoyed flying his Piper Malibu Mirage M350. This plane is capable of flying in mountainous conditions, by instrument flight rules (IFR) and visual flight rules (VRF), and could be piloted practically anywhere in the Rocky Mountains. It features:

The Piper Malibu Mirage M350 is capable of flying the entire range of the Rocky Mountains inside the United States as well as parts of Canada. For example, the distance from the Santa Fe Municipal Airport (KSAF) near Forrest's home to Sweet Grass, Montana on the US-Canada border is around 841.85 nm. The maximum range of the Piper Malibu Mirage extends is as far north as Edmonton, Alberta, Canada at around 1,117.29 nm (depending on weather and flight conditions). 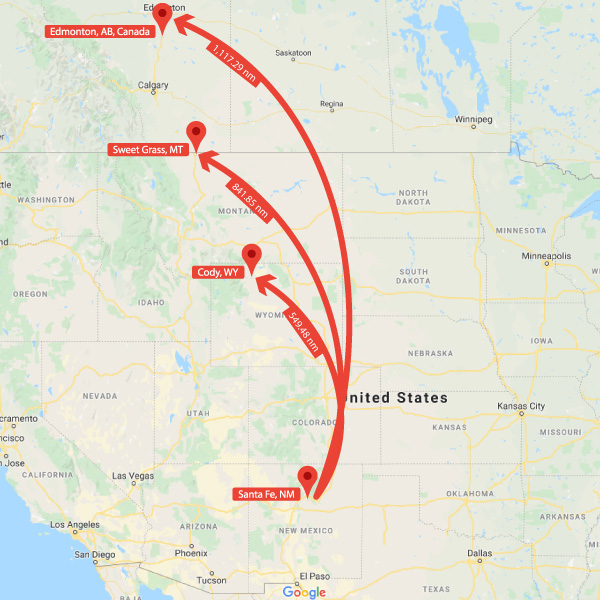 What About Fenn's Treasure and Canada?

As far as we know, the search area for Fenn's treasure ends at the Canadian border. We also must take into account that wherever Forrest landed (assuming he flew to hide the treasure chest) had an local, regional, or municipal airport or landing strip in the vicinity. He has said he drove a sedan to the treasures hidden location, and doesn't want to say when to avoid people looking up rental car records for that specific time frame. Also, keep in mine some smaller airports have courtesy vehicles visiting pilots can rent or check out for the day for local trips.

In scrapbook thirteen, Forrest Fenn mentioned one of his great pleasures was "…going to the airport, pushing the hangar doors open, cranking up that beautiful sounding 350 HP Lycoming engine, and heading north for Montana or Wyoming, not knowing or caring where I would land."

It sounds like Forrest frequently visited the states of New Mexico, Wyoming, and Montana (as well as New Mexico and Colorado since he had to fly across them while heading north). He also probably flew into the Yellowstone Regional Airport (COD) in Cody, WY and the surrounding areas during his time on the Buffalo Bill Center of the West museum board of directions and as a museum trustee.

This makes it hard to narrow down a search area specifically due to the fact Forrest Fenn owned a capable airplane and probably flew it to hide his treasure chest. It leaves the Fenn's treasure search map wide open to possibilities and possible chest locations. 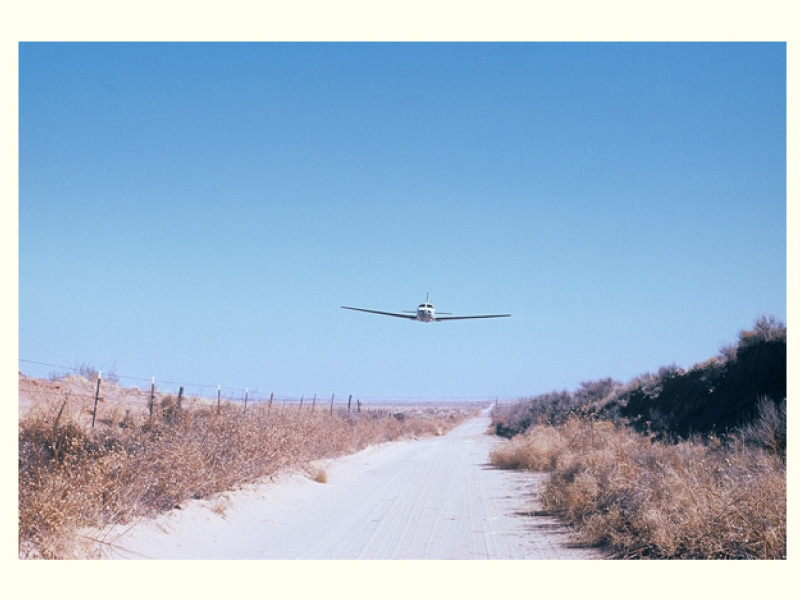