The Thrill of the Chase

A Memoir By Forrest Fenn 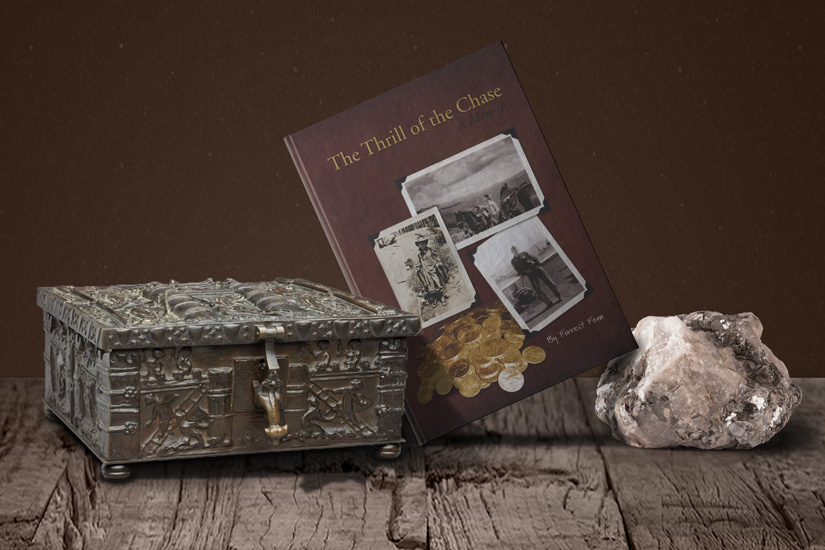 Thrill of the Chase Quick Links

About The Thrill of the Chase Book

If you found this page you may have heard of The Thrill of the Chase. Yes, that is the title of the book written by author and art collector Forrest Fenn, but the idea behind the book encompasses so much more.

It is simply what the title implies - finding the thrill of the chase. The book contains short stories, pictures, and snapshots of defining moments from Fenn's life, but the thrill of the chase is about pursuing the passions of life wherever they may take you. That is what Fenn's stories, life, and example lead on to encourage everyone else to do.

The chase described in the book's pages has come to represent may things to many people. Among them is the legendary poem found at the end of the book on page 132. The poem is said to contain nine clues which lead to the location of Fenn's treasure - a Romanesque bronze chest which is filled to the brim with gold nuggets, coins, jewelry, and other artifacts. To treasure searchers, the thrill of the chase is conquering the poem, finding the gold, and "winning" so to speak at the cost of drawing to a close the grand adventure that has enlightened so many.

To Forrest Fenn's family, children, and grandchildren, the thrill of the chase marks the memories and life of a "maverick" of a man who has given them much to look forward to in the future and set an example which will be extremely hard to follow. After seeing the way Shiloh Fenn interacts with his grandfather, Forrest Fenn, and reading Fenn's stories in The Thrill of the Chase book, I can tell that the apples in the Fenn family don't fall far from the tree. It will be interesting to see how the Fenn lineage will continue.

Then there's the thrill of the chase for the man himself. Forrest Fenn is a father, grandfather, cancer survivor, businessman, art collector, archeologist, pilot, soldier, metal worker, artist, writer, and teller of stories... among a myriad of other things. The titles could probably stretch on if you had a list of accomplishments and awards he's received. However, those things are not his focus. Now, his thrill of the chase is sharing his dreams, being remembered, and giving others something worth remembering. It is appreciating others - the artists he worked with, the people he has known, and history along with the Native American cultures.

Yes, The Thrill of the Chase does indeed mean many things to many people.

The Thrill of Chasing a Life

If you listen to The Thrill of the Chase and the wisdom it shares, you might learn a thing or two. You might see how the funny thing about life is that it is happening all around us but only stops to teach us lessons when we stop to listen. You might learn that the first thing or impulse you want to do may not be the right or best thing. You might understand that your future self would want things to turn out differently than your current situation dictates or want your life to take you in a different direction. I bet if you could look back ten to twenty years or maybe more, you could give yourself some great advice. If only you had listened then or would ask now - that choice is up to you.

The chase is life. The thrill is chasing a life you won't regret at the end of your days. The goal is creating memories with people you love and creating moments you can look back on and say, "My oh my, those were the times" and then keep on creating more. Those are just a few of the ideas Forrest Fenn communicates through his book and in the pages of his stories. 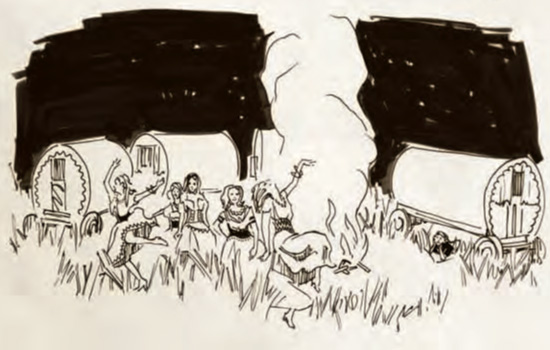 The Dancing Gypsies Picture Featured in The Thrill of the Chase

Chasing The Gold of Fenn's Treasure

And then there's the gold. Ok, it's time to be honest. We all know why we started reading The Thrill of the Chase in the first place. It was to learn about the gold and the man, Forrest Fenn, who hid it somewhere in the Rocky Mountains! That is also part of Fenn's legacy of giving back and helping other people see outside of themselves. News sources estimate over three-hundred thousand searchers and treasure hunters have looked for Fenn's treasure over the years. The treasure is said to be hidden "somewhere in the mountains north of Santa Fe" and worth over one million dollars USD, so that is a pretty prize for a seemingly simple treasure hunt.

That is also why so many people embody the thrill of the chase themselves. The treasure seekers define the clues in the poem as they want, see their own paths to Fenn's treasure, and plot their way to their fabled destination. Year after year. Mile after mile. Hike after hike. They venture to and fro in search of where their warm waters halt. Some are fortunate locals and stay close to home. Others travel from afar to scour the states of New Mexico, Colorado, Wyoming, and Montana. Many search in multiple states. First in New Mexico then in Montana or vice versa and any number of seemly special places in between.

The Thrill of the Chase Continues

At this point, I would almost be remiss if I did not say I do not like the idea of the search ending. So much has been gained from seemingly separated people in isolated locations who never would have come together otherwise. Forrest Fenn and his treasure search are what brought them together. The searchers have benefited from it in the form of adventures, crafting their own stories, making discoveries, and finding a sense of purpose driving towards fulfillment.

Forrest Fenn has also benefited from the chase in the form of interest in his life, companionship from the community of searchers, special events like the Fennboree gatherings and celebrations, a constant stream of emails filling his inbox, people memorizing his stories, remembering his accomplishments, researching his family, and appreciating his life. That alone is truly priceless.

The Thrill of the Chase goes a long way in showing us what can become of dreams if we give them voice. It shows us what one man can do when he chooses to change the world. That change will not be forgotten, and I am certain the legend will continue. 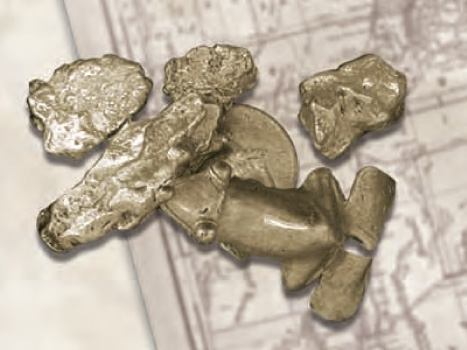 The Golden Frog Picture Featured in The Thrill of the Chase

The Thrill of the Chase - A Memoir By Forrest Fenn

Check out the Thrill of the Chase resources page here: The Old Santa Fe Trading Co 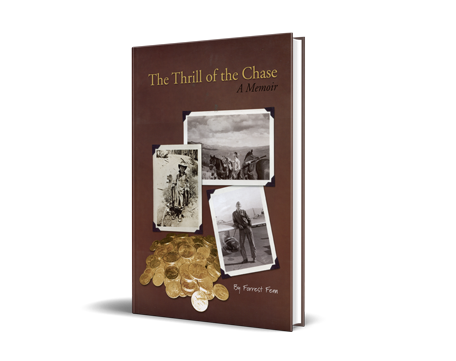 A Note From The Book Author, Forrest Fenn

Found inside The Thrill of the Chase's dust jacket-

This memoir includes a true story about a secret treasure and an outrageous dare. "Unlock the clues that are scattered among these pages and you can go home with a bronze chest that is so full of gold and precious jewelry that it's almost too heavy for one person to carry." Forrest said that if he were younger, he'd go back and get it himself.

Forrest Fenn, the author, has spent most of his eighty years in similar pursuits of passion and now wants others to share in the thrill of that chase. That's why he concealed the cache. All that will be needed are the clues, some resolve, a little imagination, and maybe a six-pack to help celebrate the thrill of a breathtaking discovery. Anyone can get lucky. But it takes mettle enough to strike the trail, and enough confidence in a maverick to know that the treasure is really there for the taking.

Other Books By Forrest Fenn:

Forrest Fenn has authored several other books on the topics of art, biographies of artists, Indian culture, and archeological finds. Check them out below. 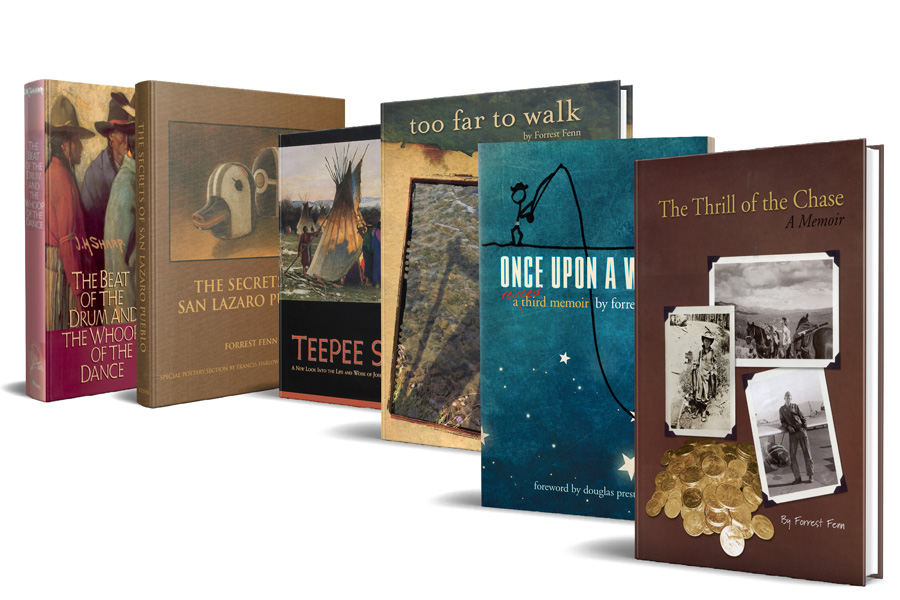 The Thrill of the Chase With Other Books By Forrest Fenn

Learn How To Find Fenn's Treasure

Want to find Forrest Fenn's treasure chest? Learn the four things you need to do to find it!